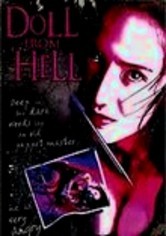 1996 NR 1h 16m DVD
A band of brutal thugs unleashes terror on an elderly doll maker and his daughter, Erika (Yuuko Sakaki), in this Japanese thriller directed by Shinobu Murata. Believing she has witnessed one of their crimes, the gang viciously attacks father and daughter, leaving her dead and the craftsman horribly disfigured. Invoking a magic spell, he sacrifices his life to reanimate Erika as an instrument of vengeance.