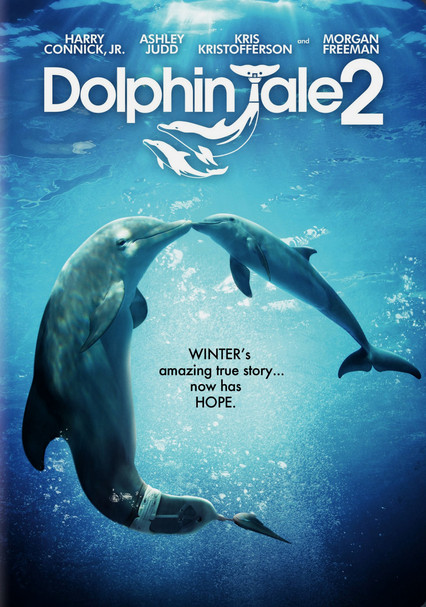 2014 PG 1h 47m Blu-ray / DVD
This aquatic drama continues the heartwarming story of Winter the dolphin, who survived a tragic injury by being fitted with a prosthetic tail. In the sequel, Winter bonds with an orphaned baby dolphin after her beloved pool mate passes away.

Parents need to know that Dolphin Tale 2 continues the story of Winter (introduced in 2011's Dolphin Tale), the beloved rescue dolphin that uses a prosthetic tale to swim. The story is family friendly and uplifting overall, but some scenes might be mildly upsetting to younger viewers. For example, Winter becomes antisocial -- and even violent -- after her surrogate mother dies. There are also a few tense rescue scenes and some touching goodbyes, but that's about it, other than some mild flirting between teens Sawyer and Hazel. The sequel isn't quite as compelling as the original, but it's just as wholesome and inspiring.

Winter has a hard time dealing with his dolphin companion's poor health (and eventual sad death) and lashes out (literally) at Sawyer, injuring him. A rescued sea turtle has an MRI; a fisherman's hook is removed from him. The crazy pelican continues to chase people throughout the movie. A couple of tense dolphin rescues.

Sawyer calls Hazel "pushy," and that's about it.

The entire staff of Clearwater Marine Hospital puts the marine animals' well-being before themselves. Family (including animal family) comes first, and -- except for a few outbursts -- everyone has a lot of respect for one another and their ideas. Bethany Hamilton and Winter show that having a disability doesn't have to define you.

The movie is filmed at the real Clearwater Marine Aquarium, which is mentioned as a place to visit.

There's a party, but it doesn't appear that anyone is drinking alcohol.