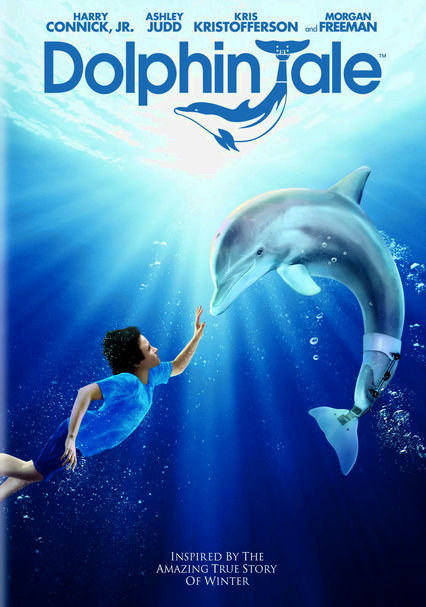 2011 PG 1h 53m Blu-ray / DVD
A badly maimed juvenile dolphin is given a new tail, and a new life, through the efforts of the humans who save it in this true-life adventure saga. After losing its tail to a crab trap, the dolphin is doomed until a young boy spots its plight.

Parents need to know that this inspiring family drama with themes of courage and survival is based on the true story of an injured dolphin named Winter. There's very little content that isn't age appropriate for kids of all ages, but younger viewers may be sensitive to a few mildly upsetting scenes: the opening shot of Winter stuck on the beach with a bloody, tied-up tail; the news of an injured character returning home from his deployment; and a sequence showing a hurricane hitting central Florida. Many school-aged children may actually already be familiar with the story, since the book about Winter's rescue is included in some middle-grade lesson plans.

A mildly flirtatious first meeting between two adult characters, plus some brief shots of shirtless and swimsuit-wearing teens at a pool party.

When viewers first meet Winter, she's lying on the sand with rope tied around her tail and body, and her tail fin is bloody and bruised. When she eventually has to have her tail amputated, she's shown in the water with the remaining stump; Sawyer and Hazel are very upset. Sawyer's cousin returns from his deployment in a wheelchair, but his injury isn't described or discussed in detail. A hurricane hits Florida and destroys parts of the sanctuary, but no animals are shown hurt.

The movie is swimming in positive messages about the importance of family and friends, the bond that exists between human and animals, and the idea that being disabled doesn't mean that you can't accomplish your dreams.