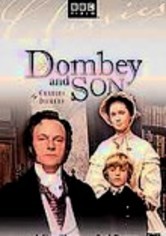 1983 NR 2 discs
After his wife dies bearing the coveted son needed to carry on the family name and business, prosperous merchant Mr. Dombey (Julian Glover) summarily disregards his daughter. Enduring her father's neglect, Florence cherishes her feeble baby brother, who's been ill since birth. When the sickly child passes away, Dombey's fortune is lost, his second wife leaves him, and now, he must learn to depend on the one he abandoned.