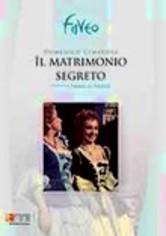 2006 NR 2h 44m DVD
As Geronimo (Enrico Fissore) works tirelessly to arrange advantageous marriages for his two daughters (Valeria Baiano and Antonella Bandelli), he's unaware that one of them has already found a mate (Roberto Coviello). Francis Travis conducts the Orchestra della Svizzera Italiana in this production of Domenico Cimarosa's "Il matrimonio segreto," an opera buffa partly based on the English comedy "The Clandestine Marriage."