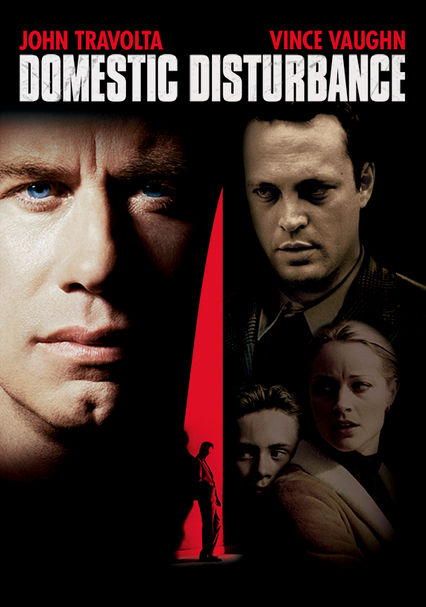 2001 PG-13 1h 29m DVD
This tidy psychological thriller stars John Travolta as recovering alcoholic Frank Morrison, who's dubious when his often-deceitful son alleges that his new stepfather is a callous killer. But Frank soon begins to sense the boy is telling the truth.

Parents need to know that Domestic Disturbance is a 2001 thriller about a stepfather who is not the good citizen he appears to be. This stepfather is both physically and verbally abusive to his new stepson. This movie also addresses issues of alcoholism and divorce; the 12-year-old stepson is accused by everyone in the town of being a compulsive liar who wants attention in the aftermath of his parents' divorce. Characters are stabbed to death, electrocuted, and attacked with baseball bats. There is frequent profanity, including "f--k." One of the characters sleeps with a prostitute.

A man is in bed with a prostitute. This same man remarks on how he "doesn't see any adult bookstores" in a town he is visiting for the first time.

A stepfather physically and verbally abuses his stepson. A man is stabbed to death in a vehicle. Another man is electrocuted.

No positive messages in this dark mystery thriller.

Characters drink champagne at a formal gathering. A man smokes cigarettes. One of the lead characters is a recovering alcoholic.