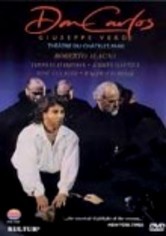 1996 NR 3h 30m DVD
Roberto Alagna performs the title role in this 1996 presentation of Verdi's epic opera, set in 16th century Spain. Don Carlos, heir to the throne, finds his romance with Elizabeth de Valois (Karita Mattila) torn apart by the Spanish Inquisition. Meanwhile, Carlos's ally Rodrigue (Thomas Hampson) implores him to help in the Flemish rebellion. Performed in the original French, this production is presented without the customary edits for length.