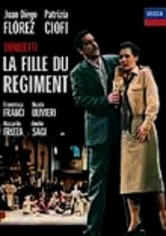 2006 NR 2h 1m DVD
Filmed in 2006 at the Teatro Carlo Felice in Genoa, Italy, this production of Gaetano Donizetti's operatic comedy follows the lovely Marie (Patrizia Ciofi), a young woman bound to the Napoleonic army since birth. Smitten by the beautiful Marie, Swiss lad Tonio (Juan Diego Florez) enlists in order to preserve their love affair -- but she's beckoned by the marquis as an heir and must abandon Tonio and the regiment. Riccardo Frizza conducts.