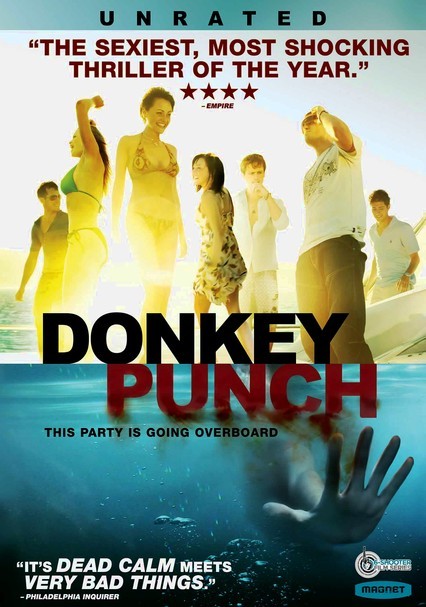 2008 UR 1h 35m DVD
In a coastal Mediterranean paradise, seven people (Sian Breckin, Jaime Winstone, Nichola Burley, Tom Burke, Julian Morris, Robert Boulter and Jay Taylor) take their nonstop party out to sea on a luxury yacht. But when one of them mysteriously dies in a freak accident, the others come to blows over how to deal with the situation. As tensions rise, betrayal and anger emerge, and the survivors turn against one another in a desperate battle of wills.

Parents need to know that this rough thriller is chock full of sex and violence and is definitely not for kids. The title itself refers to a violent sex act, and lots of sex is shown (as well as full-frontal nudity). There's also extensive drug use and extremely gory violence. While the movie does make the initial fun-in-the-vacation-sun scenes seem appealing (if excessive), its tone shifts dramatically as events spin out-of-control and get worse. At best, it could be seen as an extraordinary cautionary tale with a lesson about thedangers of not talking about sex in a realistic, respectful manner.

Strong brutal violence, including violence during sex (the "donkey punch" of the title refers to a sexual technique involving striking a female partner without her knowledge or consent), scuffling, fighting, torture, many deaths (by outboard motor, stabbing, drowning, flaregun, hanging, and more); extensive blood and images of wounds.

A group of vacationing/travelling young people act irresponsibly, with fatal results. Deckhands appropriate their employer's yacht for "a little fun." Discussion of sexual relations and relationships.

Mentions of some brands on screen.

Explicit and excessive drug use throughout the film, including marijuana, Ecstacy, "ice" (methamphetamine), and cocaine; alcohol is consumed to great excess.