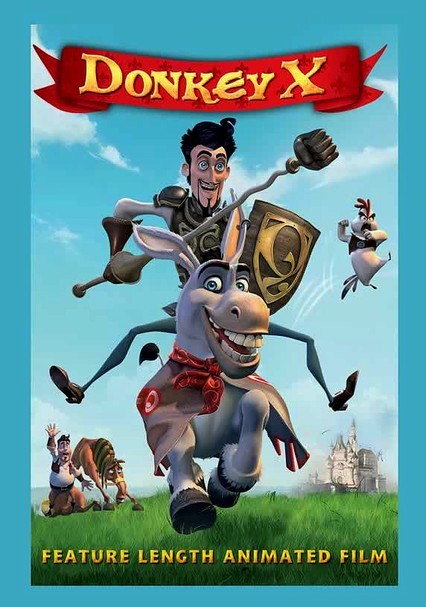 2007 PG 1h 30m Blu-ray / DVD
Don Quixote's true story is revealed through the legendary donkey of Castile, Rucio, who is owned by Sancho Panza. Mischief, acts of bravery and adventure abound when Rucio and Don Quixote challenge the Half Moon Knight.

Parents need to know that viewers who are unfamiliar with the Don Quixote story may find themselves lost or baffled by the plot at first. Though Don Quixote makes a noble, if loony, effort to be a valiant knight, many characters he meets are sinister and scheming. Moreover, most of the females are portrayed as buxom hags who nag. Lots of swords clashing and teeth gnashing, but nothing scary or gory.

Considering the target audience, the amount of cleavage shown is over the top, especially when a character grasps her ample bosom and screams, "This is a real woman!" A steed claims to be a mare, feigning a fay accent and dressing in drag until he is found out by Rucio.

Swordplay is this movie's mainstay -- after all, what else should a knight errant be doing? But no gore, no death. Some horse-on-horse violence, with poor Rucio hung by his hooves in a stall and left to burn. He escapes and is fine, though.

Two instances of the word "damn." Some direct language, like "cut the crap," "beat them, whip them, drag them."

The noble quest of a knight is to save ladies in distress, conquer evil, right wrongs, etc. Don Quixote, however, is insane, so he does not always make the best choices. Conversely, women are not portrayed as being noble. They are generally presented as harpies and nags. There are some crude bodily sounds and an image of a horse peeing in the grass.

A page pours wine for the Duke and Duchess.