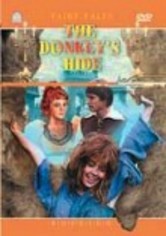 1982 NR 1h 25m DVD
Based on the classic fairy tale by Charles Perrault, this delightful story follows Therese, daughter of the widowed King Gaston IX. Therese's christening conjures a wicked fairy who foretells nothing but future doom for the spunky young girl. Years later, when Therese falls in love with a poor prince, she must disguise herself in a donkey's hide to keep her identity secret. She also receives a magic ring that enables her to change her appearance.