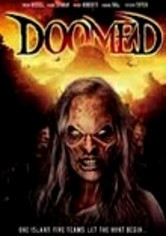 2007 NR 1h 16m DVD
On television's new reality series, "Survival Island 2020," contestants deposited on a remote isle -- who happen to be felons facing long stretches in stir -- compete for a $50 million jackpot and their freedom. But little do they know that they must first battle the island's bloodthirsty horde of zombies for the bigger prize of staying alive. Drew Russell, Kara Schaaf, Ward Roberts and Steve Cryen star in this direct-to-video horror flick.