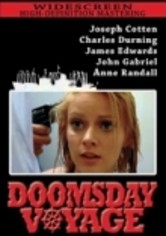 1972 R 1h 28m DVD
John Vidette's suspenseful film stars Charles Durning as a first mate aboard a ship that's been taken over by Wilson (John Gabriel), a stowaway who's kidnapped the daughter (Anne Randall) of the ship's captain (Joseph Cotten) in hopes of using her as leverage to get to New York. The entire sea vessel is held hostage as everyone scurries to follow Wilson's command -- until a new resolve takes hold among the crew, leading to a brutal denouement.