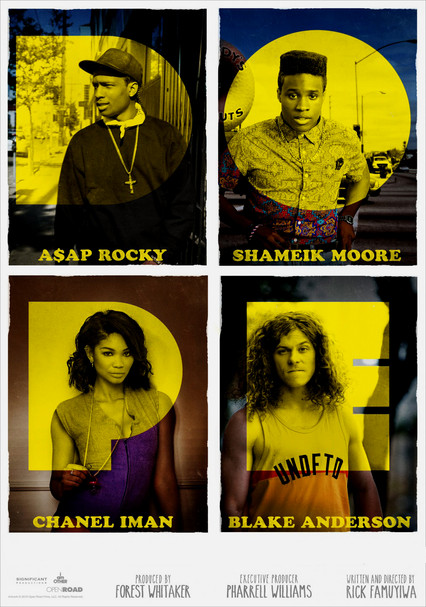 2015 R 1h 43m Blu-ray / DVD
In the tough neighborhood of the Bottoms, high school senior Malcolm sports his own funky style while working hard to gain admission to a top college. But his clean-cut perspective take an unexpected turn when a local drug dealer befriends him.

Parents need to know that Dope is a coming-of-age story about a self-professed "geek" from one of the toughest neighborhoods in Los Angeles, if not the country. The high school senior dreams of getting into Harvard but first must overcome dangerous circumstances that threaten all of his plans. Expect lots of strong language ("f--k," "motherf--ker," "s--t," the "N" word), teen hormones, substance use/dealing (alcohol, marijuana, Ecstasy), and sexual situations (masturbation and naked breasts, plus lots of talk about virginity, arousal, and more), as well as moments of violence (a deadly shoot-out, threats with words and guns, bullying) and scenes in which a young lesbian is forced to go to her grandmother's church so the churchgoers can "pray away the gay." But Dope also has thought-provoking themes about class and race in the United States and what it takes for a poor African-American teen to get ahead.

A young man masturbates in his bedroom while staring at videos of half-naked women dancing or of a photo of a woman he likes. References to sex, virginity, arousal, and various sex acts. A young woman offers herself sexually to the main character, appearing before him topless and asking him if he's a virgin.

Gang members bully kids, threats are made at gun point, a shoot-out kills and injures people, a young man waves a gun around and then accidentally shoots himself, and verbal threats make it clear that people will be killed if a young man doesn't do as he's told.

Frequent strong language, including many uses of the "N" word (all by African Americans except for one white character who's granted an "exception"); also "f--k," "motherf--ker," "motherf--k," "a--hole," "pussy," "s--t."

Examines/dissects assumptions regarding class and race. Malcolm's story arc explores how difficult it is for impoverished young people to escape poverty and better themselves. But paralleling this is the grim idea that no matter how much someone from poverty does better themselves, the worst will always be assumed.

Frequent underage drinking and drug use (marijuana, MDMA) at parties, clubs, and in private. One young woman is so drugged that she vomits, urinates in public, and temporarily passes out while driving. Teens and young adults capture and upload videos of themselves and others on "Molly" (or "Lily," as it's called in the film).