Dora the Explorer: We're a Team 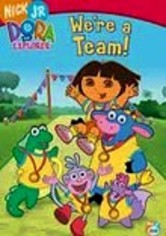 Dora the Explorer: We're a Team

2006 NR 1h 39m DVD
Dora and her pals find fun and adventure in two sports-themed episodes of the beloved Nickelodeon show. In "We're a Team," Dora, Boots and the gang team up to win the Super Adventure Race. And in "Baseball Boots," Dora takes her monkey buddy Boots to a ballgame, where he scores his first-ever hit. The program, which follows the animated adventures of 7-year-old Dora, was Nickelodeon's first bilingual series.