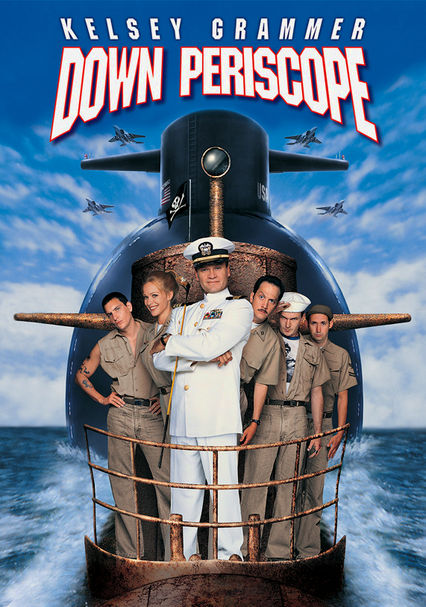 1996 PG-13 1h 32m DVD
Bumbling Navy lieutenant Tom Dodge has been given one last chance to clean up his record. But the pressure's on when his nemesis assigns him to the Stingray, a submarine that can barely keep afloat.

Parents need to know that Down Periscope is a 1996 film in which Kelsey Grammer plays a naval officer who is given command of a down-at-the-heels submarine and must lead an oddball crew of misfits to victory in a war game that will determine his future. There is occasional sexual innuendo throughout the movie, including references to the lead character having the words "Welcome Aboard" tattooed on his penis. There also is frequent profanity, including "f--k" and "s--t." Overall, this is another run-of-the-mill slapstick comedy in which a group of misfits is asked to achieve great things; adolescents may be interested because of the juvenile humor.

Occasional sexual innuendo. There is talk of the lead character having the words "Welcome Aboard" tattooed on his penis. When a woman joins the all-male crew of a submarine, the captain says things such as, "It will make things hard on us," causing the rest of the crew to giggle. When the captain is alone with the woman, a crew member asks him if he was "polishing the ol' torpedo."

Occasional comedic pratfalls. Characters slip and fall, hitting their heads on floors. A character gets hit in the groin area with a suitcase.

Although an argument could be made about the importance of teamwork and how crafty underdogs can find a way to defeat those heavily favored to win, this comedy is way too goofy to have much in the way of positive messages.

One of the sailors dresses like a pirate and wears Milwaukee's Best beer cans strapped to his arms.

Some of the members of the navy are shown smoking cigars.