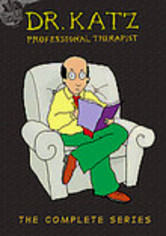 1995 NR 13 discs
In this hit animated series from the early days of Comedy Central, therapist Dr. Katz (voiced by Jonathan Katz) doles out advice to his troubled patients while dealing with his sarcastic receptionist Laura and charming slacker son Ben. Katz treats the neuroses of plenty of top comic performers -- most of them playing themselves -- including Ray Romano, Ben Stiller, Julia Louis-Dreyfus, Janeane Garofalo, Jon Stewart, Conan O'Brien and many more.