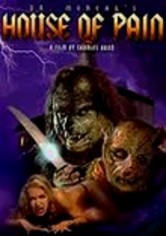 2004 NR 1h 20m DVD
When his brother disappears, Eric (John Patrick Jordan) goes to the last place he was reported to be: Doctor Moreau's secret hospital. Sure enough, Eric finds his brother ... but only half of him: The other half has been turned into a panther. And the same thing is about to happen to Eric when the doctor captures him to perform another radical transplant. Before Eric loses himself completely, though, he must rouse the other "manimals" to revolt.