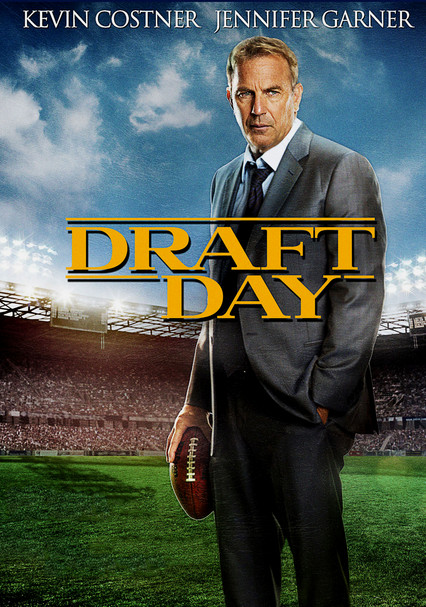 2014 PG-13 1h 50m Blu-ray / DVD
On the day of the NFL player draft, Cleveland general manager Sonny Weaver trades up to get the first pick in this breezy sports drama. And while his decision may save football in his city, it just might cost him his girlfriend ... and his team.

Parents need to know that Draft Day is a drama about the behind-the-scenes negotiations that go into football's annual big recruitment day. Although the movie is all about football, hardly any scenes actually take place on the field, so it will primarily appeal to die-hard NFL fans who know or are curious about the inner workings (however fictional) about the draft process. The movie, which was originally rated R until the MPAA overturned its decision on appeal, features lots of strong language (particularly "s--t," "a--hole," and "bitch," but also "f--k" a time or two). There are some references to sex, some kisses, and a brief shot of a woman's back as she's showering at her boyfriend's house, but nothing too risque. If the language isn't an issue for you, and your teen can handle that this football movie takes place mostly in an office (with general managers on the phone!), Draft Day is fine sports drama.

The movie starts with a "morning after" scene of a woman (who has obviously spent the night) taking a shower (her back is seen) while her lover gets up to dress and make breakfast. Some kissing and references to sex, especially a popular handsome quarterback who has a website of all "the girls he's smashed."

An upset quarterback trashes his general manager's office, and Sonny angrily throws a laptop on the floor.

Adults curse frequently throughout the movie, usually in anger, frustration, or as an insult. Words include "s--t," "f--k," "a--hole," "bitch," "damn," and exclamations like "Jesus Christ!," "Chrissakes!," "goddamn!" and "Christ!"

The movie is about how football requires heart, not just talent -- and how even the best player on paper can be a letdown in real life.

Some adult drinking and references to a 21-year-old football player's birthday party, where everyone got drunk and disorderly and cops were called.