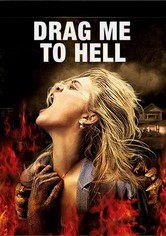 2009 UR 1h 39m Blu-ray / DVD
After denying a woman an extension on her home loan, Christine Brown sees her once-promising life take a turn for the worse. Convinced she's been cursed by a Gypsy, Christine has only days to determine how to keep her soul from being dragged to hell.

Parents need to know that this is a review of the movie seen in theaters and not the unrated version available on DVD. Many of the scares, jumps, and jolts in this horror/action movie from Spider-Man director Sam Raimi are played for comic effect. Still, it's quite bloody, and along with the scary moments and gore, there's extensive discussion of curses, spells, ghosts, and spirits. Surprisingly, the film also has an ethical core, as the main character makes several tough decisions and tries to do the right thing despite implacable odds -- though she occasionally fails.

Kissing; an unmarried couple wakes up in the same bed. Some wearing of damp, clingy clothing on the main character's part.

High on scares, but they're peppered with some humor. Extensive fighting and scuffling, with a mix of graphic imagery and good-natured goofiness; blood, but in such outlandish amounts that the effect is ultimately more cartoony than grisly. An old woman grapples with the main character, who fights her off with fists, a stapler, and the laws of gravity; a staple is plunged into human flesh. A spectral vision is hit by a falling heavy object, to squishy, comedic effect; spectral forces hurl, batter, and buffet people around. A machete is used. Discussion and depiction of animal sacrifice.

For all of the movie's horror-film trappings and scares, the message about the consequences of your ethical choices is quite strong.

Characters drink wine and speak of relatives who were alcoholics.