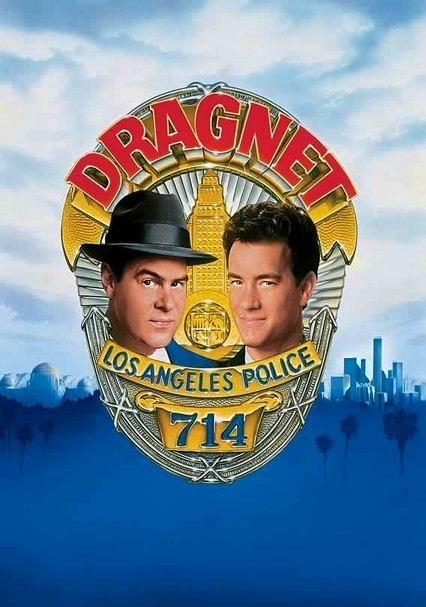 1987 PG-13 1h 46m DVD
Los Angeles detective Joe Friday (Dan Aykroyd) -- a straight-laced cop who can recite the penal code in his sleep -- and his new hipster partner, Pep Streebek (Tom Hanks), put their heads together to solve a series of nefarious, religious-cult crimes. While on the trail of a charlatan televangelist (Christopher Plummer), the mismatched duo tussles with a 30-foot anaconda and saves a would-be sacrificial virgin in this parody of the 1950s TV show.

Parents need to know that there are sexual shenanigans here, given a subplot about a millionaire porn merchant and a heroine stated to be a confirmed virgin. Pretty much nude is an exotic dancer wearing only nipple pasties and a thong. A storm of swear words issue from one female character old enough to be a grandmother (that's apparently the joke). Violent acts include bloodless gun violence, car crashes/police chases, and a modified tank as battering ram. A powerful priest with Jerry Falwell/Pat Robertson attributes turns out to be a lascivious, devil-worshipping master villain. His outdoor Satanist ritual looks like a big party (with Nazi rally overtones). There is a winking attitude towards drugs, drinking, and smoking. An older Dragnet exists on video -- also co-starring Harry Morgan -- but it's the original straight version, not this popular comedy.

A pole dancer in a thong and pasties on her nipples is about as naked as one could get without being fully nude. A suplot involves a softcore-magazine publisher (with vaguely Hugh Hefner attributes). A character is referred to as "the virgin" repeatedly.

Much shooting in the finale, plus explosions and arson fires. Cars blown up by bombs and crashed in high-speed police chases. Street punks threaten Joe Friday with knives and martial-arts weapons. Hand-to-hand combat, crotch kicks, and characters wrestling a large snake.

Swearing for comedic effect, mainly from a foulmouthed landlady ("s--t," "asswipe" ) old enough to be a grandmother. Plus "Goddamn" and "balls."

Nods to other movies (including the Nightmare on Elm Street series), salutes to Los Angeles landmarks and attractions, such as the Brown Derby restaurant.

Social drinking, including Streebek guzzling wine by the bottle. Both the hero (Friday) and the villain smoke, even though other characters mildly disapprove. Drug humor in the presence of a variety of illicit pills (to which Streebek takes quite a fancy).