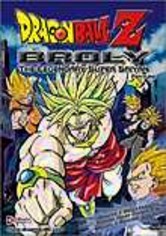 1993 NR 1h 10m DVD
This action-packed anime introduces supervillian Broly into the Dragon Ball Z franchise. When a spaceship touches down during a picnic, the Saiyan Paragus tries to persuade Vegeta to rule the new Planet Vegeta. There, Vegeta enlists Paragus's powerful son, Broly, to help him investigate a series of interplanetary attacks. But when Broly comes face-to-face with Goku, his long-buried rage sends shockwaves through the universe.