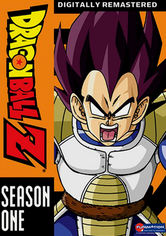 1996 TV-PG 6 discs
Goku must defend Earth against the evil Saiyans, who want the wish-granting powers of the Dragon Balls for their ruthless selves, in this anime saga. With the Saiyans carving a path of destruction across the galaxy, Goku embarks on an epic journey.

Parents need to know that this show is an enormously popular sequel to the anime series Dragon Ball and has a huge following across the globe. Consistent strong themes include good triumphing over evil, putting family first, and working as a team. Still, there's no shortage of violent scenes; characters get hurt, unconventional weapons are used, and the dialogue includes language about killing, decimating, and destroying. While the show is massively appealing to anime fans, parents need to be aware that the strong violent visuals may frighten some kids.

Characters are tied up and threatened. Others fall in pain. Lots of energy blasts knock others over.

No swearing, but lots of threatening language. "You are going to die." "Don't die before I have the pleasure of killing you."

Overall, good overcomes evil, and episodes include themes related to the importance of family and teamwork. That said, violence is often the way that conflicts are dealt with.

A full line of toys, books, games, and DVDs have been designed around the storyline and characters.