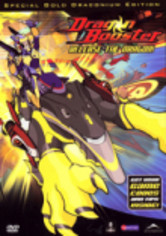 2004 NR 1 discs
In this animated fantasy series, a legendary 3,000-year-old dragon named Beau returns to fulfill an age-old prophecy on the eve of a violent conflict between Dragon City's humans and the flying beasts surrounding them. By bestowing the title of Dragon Booster on 16-year-old stable boy Artha Penn, Beau hopes to stop the war and preserve the peace between the two species. But is the adolescent up to the task of saving the world?

Parents need to know that this anime-style action cartoon has both fantasy and sci-fi elements. The dragon riders battle evil forces with their mighty scaled companions. The fantasy violence includes the dragons fighting and bashing about, but it's not graphic. The program is also strongly linked to merchandising and promotes its toy line, video games, and collectible card game.

Dragons smash and bash into each other. Lots of fighting, but none of it's particularly graphic.

Artha seeks to bring peace to a war-ridden city.

The show is clearly a vehicle to sell a vast array of products, from toys to video games.