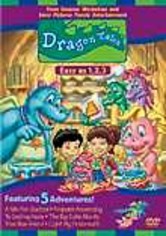 1999 NR 1h 5m DVD
Join 6-year-old Emmy and her 4-year-old brother, Max, as they embark on five enchanted learning adventures in Dragon Land in this highly touted PBS series co-produced by the folks at Sesame Workshop. In these episodes, the lovable and hilarious troupe of dragons -- Quetzal, Cassie, Zak, Wheezie and Ord -- take on the challenge of numbers.