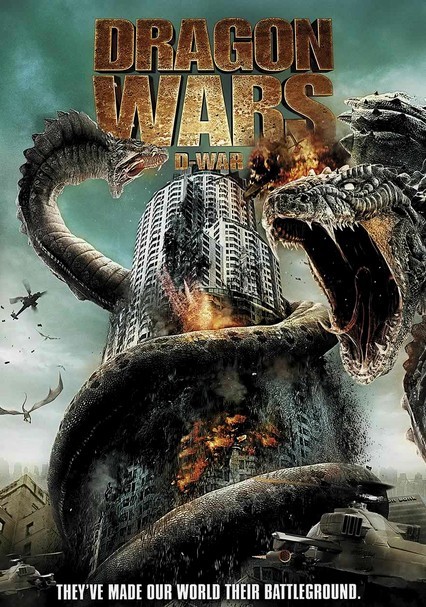 2007 PG-13 1h 30m Blu-ray / DVD
This Armageddon-fueled thriller focuses on reporter Ethan Kendrick, who's investigating a series of disasters taking place in Los Angeles. He soon discovers that the City of Angels is under siege by huge dragons, and that it's up to him to save it.

Parents need to know that this monster movie is full of explosions and lots of CGI snakes and other reptiles that roar, shoot fire, and chomp and stomp on their human victims. Combat scenes set in the past feature cannons, while current-day warfare sequences include tanks, missiles, and small arms fire. A giant snake crashes through buildings and flips cars, making many city dwellers run and scream (and burning some to ash). There's a brief kiss between the featured couple and relatively minor language (a couple of uses of "s--t," "hell," and "ass").

Gentle flirting and handholding between young couple. Sarah first appears in a gym top that shows her dragon tattoo and a little cleavage. Sarah and Ethan kiss romantically on the beach.

Lots of explosions and CGI creatures flipping and attacking, but very little blood. Most of the violence is caused by the giant "snake" pursuing Sarah: It crashes through a hospital, a multi-floored parking garage, and L.A. streets (crashing cars in the process); it writhes around a high-rise, smashing windows and knocking out helicopters; and it fights with another giant snake, wreaking havoc all around (burning many people to ash in the process). Characters jump off a cliff to avoid the snake (they die off-screen). Combat scene set in 1507 features warriors with spears, swords, and cannons, as well as reptiles that not only stomp on enemies but also spit/shoot explosive fireballs; in 2007, they battle tanks, helicopters, missiles, guns, and grenades. A brief training scene includes fighting with swords and sticks. Sarah is attacked by three thugs; Jack appears to beat them up (one hits a windshield, hard). A snake chews and spits out an elephant (bloody carcass visible). Snake picks up and throws a character who later appears dead on a gurney. Creepy FBI agent shoots Ethan; a second agent shoots and kills the first one. Bruce suffers injuries in a car accident.

Mild language, including a couple of uses the following words: "s--t," "ass," and "hell." Other words/phrases include "old fart" and "crap."

Noble young couple's true love lasts over 500 years and through two incarnations (in Korea and the United States). Evil devotees of the bad snake destroy everything they see. Giant snakes are generally fearsome. FBI agents are underhanded and untrustworthy.

In a bar, Brandy buys beers for her and Sarah, but Sarah leaves, worried about her "bad feeling."