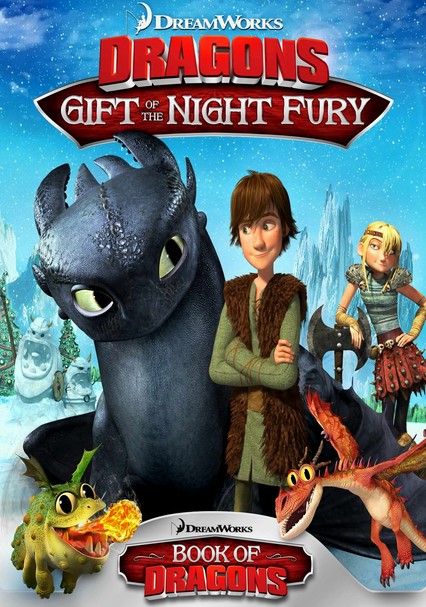 2011 NR 0h 40m DVD
Spun off from the hit feature film How to Train Your Dragon, this pair of animated shorts follows the further adventures of Viking lad Hiccup and his dragon friend Toothless as they encounter a new array of rare dragon species.

Parents need to know that DreamWorks Dragons: Gift of the Night Fury is a holiday short film that follows How to Train Your Dragon, so knowing the story behind the characters' relationships will help you jump into this one. There's some marginal language (a girl calls her brother an "idiot," and "stupid" is used a couple of times), exploding houses, and mild gross-out humor that's bound to delight kids, but these make less of an impression than do the meaningful themes about family relationships, friendship, and the joy of giving. Because the story centers on a fictional Viking holiday, it welcomes viewers of all beliefs and cultures.

No cursing, but there's some name-calling. A girl tells her brother that he's "such an idiot," and "stupid" is heard a couple of times in reference to objects, not people.

The story has heartwarming messages about appreciating the important things during the holidays. Being with friends and family and giving selflessly are common themes, as is the joy of friendship. The story centers on a winter holiday that resembles Christmas, but it keeps references vague enough that it could be enjoyed by viewers of any faith or culture.

The movie follows a very successful feature-length film, and knowing its back story adds to the enjoyment of this holiday special.