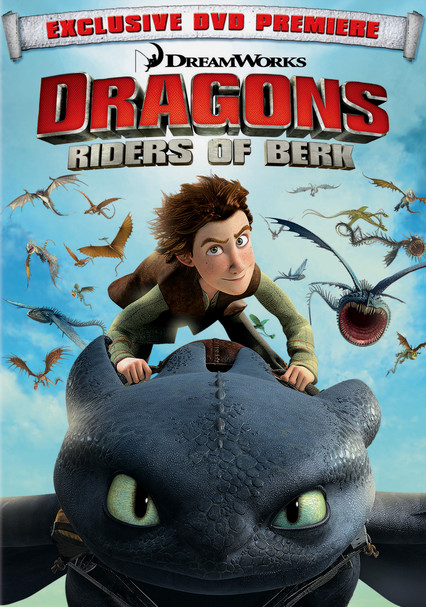 2012 NR 1h 28m DVD
Hiccup and his friends from How to Train Your Dragon carry on figuring out how the Vikings and the Dragons can live together side by side in the episodes "Viking for Hire," "How to Start a Dragon Academy," "The Terrible Twos" and "Animal House."

Parents need to know that Dragons: Riders of Berk is a TV follow-up to the popular DreamWorks movie How to Train Your Dragon. If you (and they) liked the movie's quirky characters and strong messages about self-confidence and courage, there's plenty more where that came from here, plus bonus lessons in identifying your talents, getting along with others, and opening lines of communication with parents. Hiccup and Astrid are fantastic role models who don't mind standing out from the crowd, and their willingness to stand by their convictions proves to be the difference for their village's survival. Expect some fantasy violence, most of which relates to the dragons' ability to breathe fire, and some scary scenes because of the dragons themselves. But since most of the dragons in the show are friendly from the get-go, the potentially frightening stuff has less impact here than it did in the movie.

Hiccup and Astrid have feelings for each other, but there's little more than nervous flirting between them.

Some of the dragons are pretty scary to look at, especially when they bare their teeth or breathe fire, but the series' key dragon characters are friendly toward the humans rather than at war with them. Perilous scenarios and plot cliffhangers briefly give viewers reason to worry about the characters' well-being, but things usually work out in the end. There's some slapping, falling, and trampling in some of the scenes, but everyone escapes without serious injury.

Dragons: Riders of Berk is grounded in messages about strong family relationships and friendships, and the characters draw strength from these to cope with the daily ups and downs of life. The kids are the real heroes here, and the stories celebrate how their willingness to think outside the box has led to a new, peaceful era for the Vikings. There are also some sweet messages about the bonds between humans and animals (or, in this case, dragons) that will have special meaning for families with furry friends of their own.

The series follows a popular feature-length film and is inspired by a book series by Cressida Cowell. There's also an accompanying product line of kids' accessories, video games, and toys.