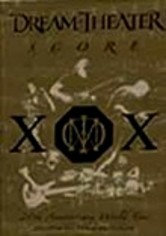 2006 NR 2 discs
In the final concert of their 20th Anniversary World Tour, progressive metal band Dream Theater played for nearly three hours (90 minutes of it with a full orchestra) at New York's Radio City Music Hall. Among the selections are "I Walk Beside You" and "Raise the Knife." Also included are several bonus performances plus a documentary charting the group's career via interviews with current and former band members.