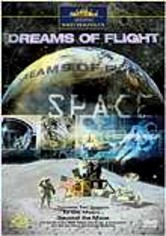 2000 NR 1h 40m DVD
This collection includes two programs -- "Beyond the Moon" and "To the Moon" -- from the popular Smithsonian series. The video takes viewers back in time to the birth of space exploration. What began as science fiction for luminaries like Jules Verne and H.G. Wells became a reality for Werner Von Braun, who introduced America to the moon. From the Gemini to Apollo, the voyage to the moon is detailed in this fascinating documentary.