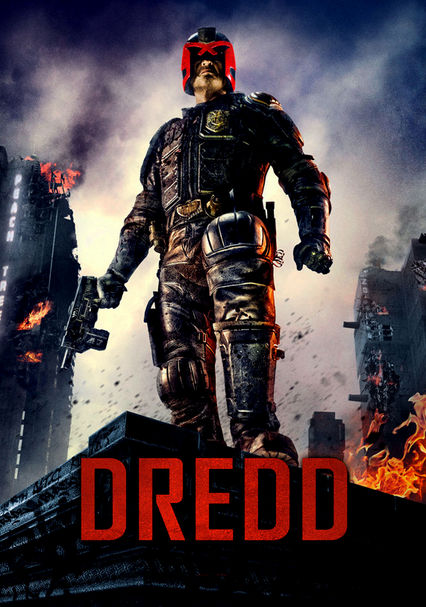 2012 R 1h 35m Blu-ray / DVD
In the future, catastrophic wars have transformed Earth into a barren wasteland with the remaining population crowded into megacities, where all-powerful cops -- including the ultraviolent Judge Dredd -- are on the hunt for drug-dealing terrorists.

Parents need to know that Dredd 3D is based on the futuristic comic book hero Judge Dredd, who was also the subject of a 1995 Sylvester Stallone movie. The new movie is full of extreme sci-fi/fantasy violence, with thousands of bullets fired, gallons of blood spilled, and hundreds of casualties, including victims splattered and burned (and it's all even more intense in 3-D). Language is almost as strong, with many uses of "f--k," as well as a few other words. Sex comes up in a kind of fantasy "psychic" sequence in which a character briefly imagines oral sex being performed on him (nothing graphic shown). Though real drugs/alcohol don't appear, the entire plot is about the manufacture and distribution of a fictitious, illegal street drug called "Slo-Mo." Viewers see drug trip scenes and teens trying it. Overall, this is fairly intense for a popcorn movie and is best for mature older teens and up.

Extreme sci-fi/fantasy violence, with gallons of blood spilled, hundreds of casualties, and thousands of bullets fired (some in detailed slow motion). Characters are smashed by cars, burned alive, and thrown from great heights, splattering on the ground. Other characters are beaten, pummeled, and bloodied; a neck is broken violently. In a few extremely quick flashback shots, characters are skinned alive. Two teens pick up guns to try to kill Dredd; he stuns them before they can cross that line.

Language isn't constant but contains many uses of "f--k," as well as a few uses of "s--t," "motherf---er," "ass," "goddamn" and "bitch." The heroes mostly refrain from using bad language.

Dredd learns that his black-and-white rulebook doesn't necessarily apply when he's assigned to test out a new rookie; she doesn't officially pass, but she behaves above and beyond in other ways. On the other hand, the way that criminal behavior is dealt with in this futuristic world may raise questions about how far the power of the law should extend.

The main villain manufactures and sells a (fictitious) illegal street drug called "Slo-Mo," which slows down the user's experiences. Slowed-down "drug trip" scenes are shown throughout the movie. Some teens are seen using the drug. No real-life drugs or alcohol are shown.