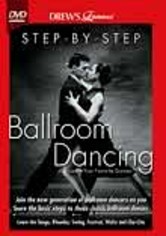 2005 NR 1h 0m DVD
Your television serves as your instructor in this step-by-step tutorial that breaks down the basics of ballroom dance, including the tango, the swing, the cha-cha, the foxtrot and the waltz. After you've mastered each step, you can apply what you've learned to a soundtrack of familiar standards, including "It Don't Mean a Thing," "Route 66," "Cell Block Tango," "Moon River," "Tea for Two" and "I've Got You Under My Skin."