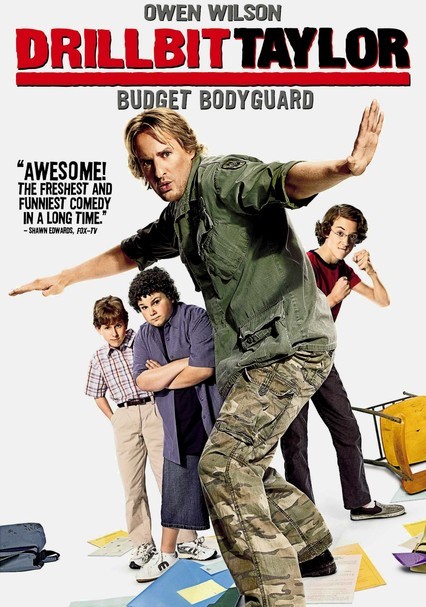 2008 UR 1h 49m Blu-ray / DVD
In this underdog romp, three high school freshmen devise a novel plan for dealing with the school bully: They hire a bodyguard in the form of Drillbit Taylor, an ex-soldier turned beach bum who teaches the boys some life lessons.

Parents need to know that this teen comedy was produced by Judd Apatow -- who directed the "hard R" comedies The 40-Year-Old Virgin and Knocked Up -- and co-written by Knocked Up star Seth Rogen (who also co-scripted Superbad). With a PG-13 rating and a focus on high school bullies, the adult humor and language are dialed down a few notches here (there are a couple of bare-butt shots of Drillbit showering, as well as words like "s--t" and "bitch") ... and replaced with relentless, violent bullying behavior. The freshmen are constantly threatened, beaten up, chased, and humiliated. For most of the movie, parents and the principal laugh the behavior off. Also expect plenty of product placement and fat jokes aimed at a young teen.

Two bare-butt shots of Drillbit showering on the beach (people passing in cars can see him from the front). Drillbit and the English teacher have daily quickies in the classroom -- though nothing but kissing is shown. As part of a rap, Ryan says "suck on my family's jewels, bitch" and grabs his crotch. Life Skills class talks about symptoms of STDs and shows a diagram of a penis. In bullying montages, pants are pulled down in hallways, and boys are pushed to face each other at the urinals, then picked up -- viewers see pee hit the ceiling.

Lots of teen fist-fighting. The over-the-top bullying behavior is meant for some laughs, but the main bully, Filkins, is practically a sociopath. He nearly runs the freshmen down in his car, punches them out repeatedly (breaking a nose), and hits them with other objects (like the base of a lamp). He eventually throws a sword that severs a finger. Includes scenes in which the freshmen boys try to learn how to fight and end up hurting each other repeatedly (played for laughs, including the easy groin gag).

Words include "bitch," "ass," and "s--t," as well as negative stereotype words like "faggot" and "queers."

The main bad guy is a cruel, unrelenting bully; the principal and parents laugh off his behavior like it's all in good fun. Drillbit is a chronic liar who comes to care for his naïve young charges and decides not to rob them in the end -- but still takes their weekly "protection" money. The protagonists skip school to learn fighting techniques and raid their parents' homes for whatever Drillbit asks for, including expensive suits and electronics. Also lots and lots of fat jokes aimed at a young teen -- and a few skinny-boy jokes, too.

Kids party before the big fight, and everyone has a big plastic cup in their hand. Adults drink. Plenty of references to pot smoking.