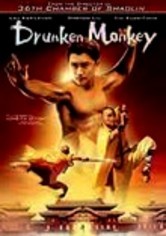 2002 R 1h 38m DVD
When Wen Biao learns his brother has been engaging in illegal activities and using their security company as a front, a brutal confrontation between the two men ensues. Though he's left for dead by his brother, Wen Biao's not done fighting yet. After recovering from the encounter, he faces off with his sibling for an epic showdown. Directed by Lau Kar Leung, this martial arts extravaganza stars Wu Jing Jason, Gordon Liu and Kuan-Chun Chi.