Duel of the Brave Ones 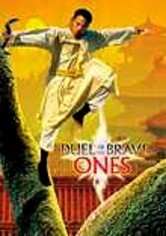 Duel of the Brave Ones

1979 R 1h 25m DVD
When a gang war breaks out over disputed territory, crime boss Wai (John Cheung) blames his lieutenant, Ah Sing (Wilson Tong), for failing to wipe out the competition. Angered by the betrayal, Ah Sing steals his boss's priceless jade amulet in an act of defiance. The police track the fugitive Ah Sing to a brothel, where a no-holds-barred martial arts brawl erupts. Pak-Kwong Ho and Chok Chow Cheung co-star.