Duel of the Masters 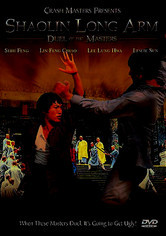 Duel of the Masters

1988 NR 1h 35m DVD
Director Tang Wei Cheng brings to life the story of an ancient feud that's reborn when two kung fu masters (Hsu Shao Chiang and Sunny Yu Huan Chung) are brought together to fight evil once again. The masters use their cunning, strength and magical powers to fight elaborate battles in this exciting martial arts film. Chiang has also starred in the martial arts films The Descendant of Wing Chun and The Mighty Peking Man.