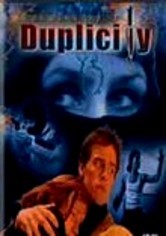 2004 NR 1h 35m DVD
On the eve of asking for a divorce, Reggie Lucas (Polly Frame) learns that her husband, Charles (David Fitt), has been murdered -- and $18 million of his money has disappeared. Turns out, Charles was involved in some shady dealings, and a trio of mobsters is waiting for payment. They'll stop at nothing, even murder, to get what's theirs. Tom Mitchelson co-stars in this tongue-in-cheek remake of Charade.