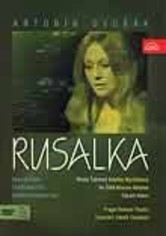 1975 NR 2h 0m DVD
This 1975 Czech television version of Antonin Dvorak's celebrated opera about a water spirit who falls in love with a human prince features actors lip-synching to the recording of the 1961 Prague National Theatre production. Eduard Haken reprises his role of Jezibaba, but Milada Subrtova, Ivo Zidek and Alena Mikova star in voice only. Also heard are the Prague National Theatre chorus, conducted by Jan Maly, and Zdenek Chalabala leading the orchestra.