Dvorak: Symphony No. 9: From the New World 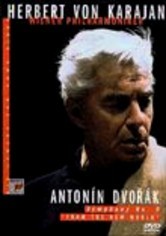 Dvorak: Symphony No. 9: From the New World

1985 NR 0h 43m DVD
Under the direction of Herbert Von Karajan, the Vienna Philharmonic performs Austrian composer Antonym Dvorak's Symphony No. 9. Dvorak's work was influenced by both European and American folk music, and in his later years by African-American and American Indian music. A favorite for soundtracks, this symphony is instantly recognizable to many. The video includes liner notes and biographies of the performers.