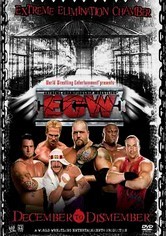 2006 TV-14 3h 30m DVD
You'll have a ringside seat as some of the world's most brutal bone-crushers square off in a series of marquee matches. Bob "Hardcore" Holly, Rob Van Dam, Bobby Lashley, C.M. Punk, Test and the Big Show enter the Extreme Elimination Chamber in a ferocious battle for the world championship crown, while the Hardy Boyz take on MNM in a tag-team duel. Other bouts include Shawn Daivari vs. Tommy Dreamer.