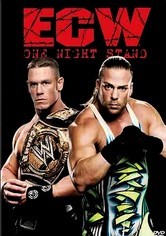 2006 TV-14 3h 0m DVD
Some of the biggest names in Extreme Championship Wrestling and World Wrestling Entertainment come together once again for a spectacular evening of carnage captured live in New York City. The electrifying action includes matchups between John Cena and Rob Van Dam; the World Heavyweight Championship battle between Rey Mysterio and Sabu; plus a co-ed tag-team fight involving Tommy Dreamer, Terry Funk and Beulah vs. Mick Foley, Edge and Lita.