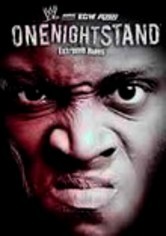 2007 TV-14 3h 0m DVD
Grab a ringside seat for three extreme wrestling matches: WWE Champ John Cena vs. the Great Khali; ECW World Champ Vince McMahon vs. Bobby Lashley; and World Heavyweight Champ Edge vs. Batista. Based on the Extreme Wrestling Championship rules, these hard-core bouts showcase the brute strength and relentless assaults of some of the world's top extreme fighters, including the colorful addition of stars from Raw and SmackDown.