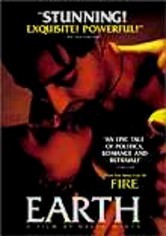 1998 NR 1h 41m DVD
Deepa Mehta directed this stirring tale -- the second movie in a trilogy preceded by Fire and followed by Water -- about the religious and civil wars that broke out in India and Pakistan in the 1947 battle to gain independence from the British. Earth is based on the autobiographical novel &NFiCracking India&NFi_; by Bapsi Sidhwa and is told through the eyes of a little girl, Lenny (Maia Sethna), who has one leg in a brace.