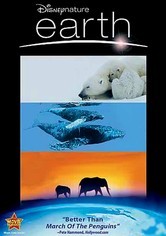 2007 G 1h 30m Blu-ray / DVD
Fueled by dazzling high-definition photography and stunning locations around the world, this nature documentary captures three animal families in action over the course of a year, showing how the sun influences behavior and migratory patterns.

Parents need to know that this stunning nature documentary portrays how animals around the world are born, live, and, yes, die. Although there aren't any grisly shots of predators ripping apart their prey, there are disturbing scenes in which animals are chased and attacked. In a few cases, the predators win; you see them grip their catch with their teeth, but then the scene quickly changes. Other than those possibly upsetting scenes -- plus another in which an animal dies of starvation and exhaustion -- the film is appropriate (and educational) for kids of all ages. It's worth noting that the movie uses footage from the acclaimed TV series Planet Earth, so if you've seen that, you've seen the images included here.

The mating rituals of a few animals are discussed, and, in one humorous sequence, a male bird of paradise tries to seduce a female by tidying up his habitat and performing a special "song and dance."

In several scenes, predators -- a pride of lions, a cheetah, a wolf -- successfully catch and kill other animals, such as an elephant, a caribou calf, and a gazelle. In each case, the camera cuts before anything grisly happens, but the animal's death is obvious and could upset some kids. Another animal dies (on camera) of starvation, and one confused young elephant ends up walking in the opposite direction of his herd, which will clearly lead to his death.

The movie is a strong argument for conservation and taking care of the planet. It doesn't shy away from showing the realities of life in the wild, but it doesn't linger on or exploit the sadder scenes, either.