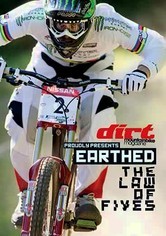 2007 NR 1h 5m DVD
Behold the wicked speed and mad maneuverability of the world's best downhill mountain bike racers, including the peerless Sam Hill, who won the World Cup and World Championship in a single season by crushing the competition's time. This video recap of the season's other best races and performances also includes interviews with riders, helmet-cam shots and choice crash footage to keep things lively.