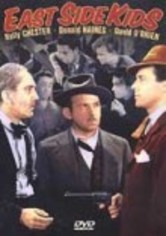 1940 NR 1h 2m DVD
This early East Side Kids feature stars Little Tough Guys Hal E. Chester and Harris Berger in a story that finds a group of tough-talking boys looking for a murderer in an effort to clear their own names. Frankie Burke, Jack Edwards, Donald Haines, Edwin Brian and Sam Edwards also star. (The film doesn't feature any of the original Dead End Kids who are normally associated with the East Side Kids series.)