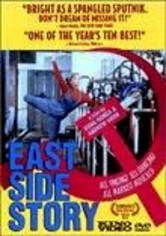 1997 NR 1h 18m DVD
This 1997 documentary presents an amusing and fascinating compilation of scenes from Hollywood-style musicals produced by the Eastern bloc during the Cold War. Rarely seen in the West, these films attempted to promote communist ideology and to entertain, resulting in sturdy peasants and workers frolicking through meadows and factories. Interviews with filmmakers and critics, newsreel footage and censored press files provide added perspective.