Eastern Horror: Magic of the Universe 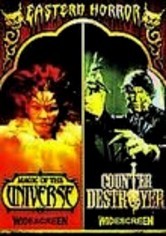 Eastern Horror: Magic of the Universe

1988 NR 1h 30m DVD
A magician must descend into the terrifying depths of the underworld to rescue his daughter from the sinister forces of dark-art wizardry. When the circus magician performs a disappearing act using his daughter as the subject, she really vanishes! Supernatural forces have punished him for fooling around with black magic by kidnapping his daughter. Martial arts and the supernatural meld for a dose of freaky fun in this Filipino horror flick.