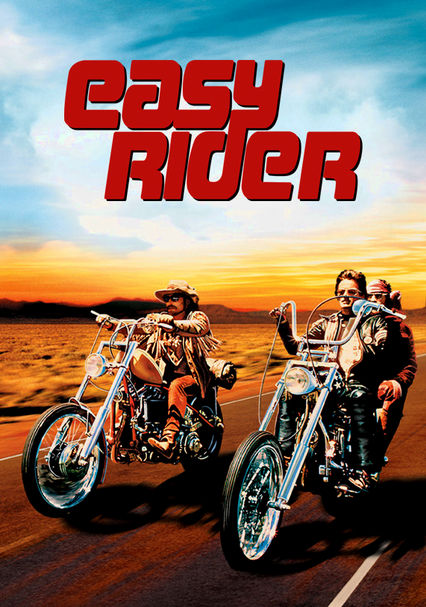 1969 R 1h 35m Blu-ray / DVD
With cash from a cocaine sale, two freewheeling hippies hop on their motorcycles and ride across America toward New Orleans, clashing with rednecks and picking up a boozy lawyer along the way in this counterculture classic.

Parents need to know that the release of Easy Rider in 1969 marked a significant change in American filmmaking. Never before had a low-budget, offbeat movie made such an impact on young audiences. Reflecting a chaotic time in a country that was deeply divided in its values, the film's frank treatment of alternative lifestyles, sexual "freedom," and drug and alcohol use (pervasive marijuana smoking, consumption of cocaine and hallucinogens, heavy drinking and drunkenness) struck a deep nerve. The film and its music are still considered classic and unequaled. Mild, infrequent swearing ("a--hole," "Yankee queers," "goddamn") is included. Sexuality and some nudity (no intercourse) are seen in both idyllic settings and in a frenzied acid trip. The few violent scenes are extreme, shocking, and bloody. (Spoiler alert: Important characters are killed by gunfire and a brutal beating).

Four people swim naked in a pond; shadowy body images are visible, with suggested sexual play. A scene in which the characters are in a hallucinogen-induced state shows two men and two women engaged in sexual activity (not intercourse), with embracing, undressing, and some nudity. Set in 1969, a time when "free love" was at its height, characters are portrayed as having few inhibitions and as attempting to celebrate their sexuality.

Only a few violent scenes, but they're horrific, including a brutal beating, explosions, shotgun murders, and the bloody aftermath of these events.

By modern standards, relatively mild language for an R-rated film: "goddamn," "whorehouse," "a--hole," "hell," "Yankee queers." There's a wide shot of three men urinating in a rural roadside setting. A character makes an obscene hand gesture to a troublemaker. In addition, there is lots of bullying, insulting, and name-calling directed at the counterculture characters who are the film's heroes.

Complex attitudes and points of view are organically integrated into the story, the characters, and the mood of the film. Set in 1969 at the height of some of the most chaotic social changes in America, the basic idealism and goodness of Americans are shown to be at risk, as is the concept of "freedom." A repressive establishment is portrayed as wreaking havoc in its attempts to protect the status quo. On the other hand, members of the counterculture exhibit their own brand of lawlessness and emptiness, fortified by drug use. No easy answers here.

Gasoline stations include 76, Esso, and Enco. Beverages include Coca-Cola and Jim Beam. A character wears a hat with the Cat Diesel Power logo.

Pervasive marijuana smoking; leading characters are stoned throughout the movie -- a veritable celebration of sharing joints and living "high." Cocaine is tested, snorted, and sold in early scenes. A lengthy (more than four minutes) sequence shows the effects of a hallucinogenic drug on four young people; it's harsh, sexual, and frightening and includes disturbing religious images. Alcohol is consumed throughout; one character is a confirmed alcoholic who has given up on sobriety.