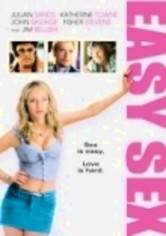 2003 R 1h 31m DVD
Trying to add zing to his humdrum existence, middle-aged college professor Packard Schmidt (Julian Sands) instead puts himself on a path to disaster when he impetuously has an affair with his best friend's daughter (Katharine Towne) during a convention in Las Vegas. As Schmidt becomes increasingly obsessed with the girl, he finds his life going down the drain in this dark comedy also starring James Belushi as an Elvis-impersonating chauffeur.